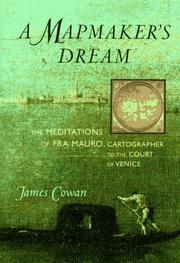 The Meditations of Fra Mauro, Cartographer to the Court of Venice

The subject of Cowan's (Messengers of the Gods, 1993, etc.) first novel—the thoughts of an intellectually adventurous Renaissance cartographer—should make it soar, but instead it remains painfully inert. Fra Mauro is a Venetian monk who never leaves his cell yet wants to create the greatest map of the world. Is this folly, or is he as well equipped as anyone—since mightn't ``the world [be...] a place entirely constructed from thought''? Mauro tests his hypothesis by receiving men who have traveled widely and come to him with their tales—a merchant who has seen the Orient, another who has been among the Mongols, others with tales of one-eyed and one-armed humans, or one-legged people, or collectors of heads and eaters of their own flesh. That the mind may create the world as much as vice versa is an idea equally at home in the Renaissance world of Hamlet and in the age of Picasso—but Cowan's tale brings it forward on feet of lead and too often with prose to match (``The more I translated his words, the more I began to believe that neither of us had a hegemony over truth''). Fra Mauro's visitors, and the good monk himself, remain underdetailed and dimensionless as an essay-like tone presides over dramatic near-inertia (``It dawned on me then that the world had to be considered as an elaborate artifice . . .''). ``What these men bring to me . . . is a feeling of awe,'' Mauro says at one point, making the reader only regret being unable to feel the same. Near books's end, as Mauro actually sits down to draw his map, Cowan produces a handful of pages as brightly filled with a wealth of life as Homer's description of Achilles' shield—but these are a small number among the gray many. A potential feast for thought, but in a novelistic equivalent of talking heads.