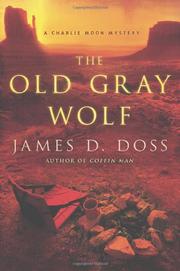 Doss, who died this past spring, parts company with Charlie Moon (Coffin Man, 2011, etc.) in this 17th and final go-round.

It’s an ignominious ending for purse snatcher LeRoy Hooten, who enters the hereafter when Granite City chief of police Scott Parris beans him with a can of black-eyed peas while his pal Charlie Moon, part-time deputy, former Ute tribal investigator, inveterate gambler and laconic rancher, looks on. Hooten’s mom, Francine, who takes offense at the lucky pitch that caused her son’s demise, calls on the notorious “cowboy assassin” to take out Parris and Moon, thus setting in motion an all-consuming debacle that strews bodies and witticisms from Illinois to Colorado, with stopovers along the way for spirit sightings, pitukupf visitations, double dates, engagements and disengagements, grumblings from Moon’s irascible old auntie Daisy Perkia, and deep sighs and despair from lovesick Ute-Papago orphan Sarah Frank. Of course there are a few detours to allow a retired Texas Ranger, his private-eye-wannabe granddaughter and a luscious FBI agent to have their say and slay while still leaving room for red herrings that jack up the suspense. In all, five will expire, assumed identities will crumble and not a single reader will get through a page without a guffaw or two.

The puckish Doss, who combined charm, mayhem and deviously clever clues, will be much missed.