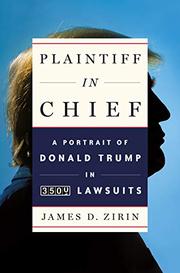 A Portrait of Donald Trump in 3,500 Lawsuits

Another searing exposé of the current president.

Former federal prosecutor Zirin, a “middle-of-the-road Republican,” pieces together a highly damning portrait of Donald Trump as a serial abuser of the law, lifelong liar, perjurer, business fraudster, tax evader, racist, and serial perpetrator of sexual assault. The book is so incriminating not only because of the author’s credentials, but also because the details are grounded in approximately 3,500 lawsuits filed by Trump, against Trump, or, in some instances, cross-filed by the opposing parties. Because litigation generally includes sworn affidavits attesting to accuracy and testimony given under oath if a trial occurs, the author is able to accurately document, page after page, the unbelievably long list of Trump’s exaggerations and outright falsehoods. In fact, the documentation provided by Zirin is impossible to refute, by Trump or anybody else who might take exception to this book (most of whom will ignore the facts anyway). The author began his painstaking research in 2015, soon after Trump announced he would seek the presidency on the Republican Party ballot. Because Zirin had spent his decadeslong law career in New York, he had already formed an impression of Trump as a businessman who lacked respect for the Constitution and the courts. Among other topics, the author focuses on Trump’s ties to organized crime; his business frauds related to hotels, casinos, and residential rental properties; and his phony Trump University. An entire chapter covers litigation related to Trump’s mistreatment of women, including physical assault. In every chapter, Zirin explains how Trump abuses the court system, which is funded by American taxpayers, by filing lawsuits in bad faith. He also targets Trump’s lawyers for their unethical behaviors. Though the author’s writing is not always easy to follow, as he sometimes lapses into lawyerly jargon, his overall message is achingly clear: “All this aberrant behavior would be problematic in a businessman….But the implications of such conduct in a man who is the president…are nothing less than terrifying.”

A unique approach to the continuing deconstruction of the Trumpian edifice.