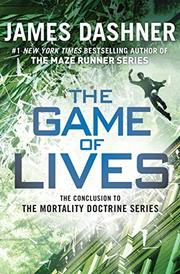 THE GAME OF LIVES

From the Mortality Doctrine series, volume 3

After narrowly escaping the villainous Tangent Kaine's clutches at the conclusion of The Rule of Thoughts (2014), Michael, Bryson, and Sarah are joined by Michael's old nanny, Helga, and a group of rebel Tangents to thwart Kaine's evil plans once and for all.

But not all is as it seems. Tragedy occurs, motives are revealed, and foe becomes friend in Dashner's exciting finale. Dashner throws everything he has in to this volume, making for a breathless, action-packed read that will have readers on the edges of their seats. He further explores his hard sci-fi premise, in which beings flow like water between a computer world and a real world, lending the book as much speculative fun as action. The characterization still leaves a bit to be desired; few characters are given the depth and shading the author gives to Michael and Kaine. Moreover, Dashner doesn’t seem to have quite enough guts to keep a particularly painful death permanent; the novel's final pages allude to a resurrection that, while sweet, will make a few readers roll their eyes. However, in the broadest of strokes Dashner has stuck the landing, crafting a complete sci-fi trilogy that has little fat to trim and plenty of action, laughs, thoughts, and emotion. These books have notably improved with each outing, making this the best of the bunch.

A fitting end to an exceptional trilogy.