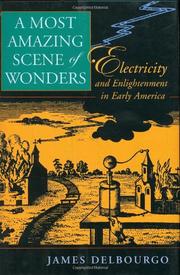 A MOST AMAZING SCENE OF WONDERS

Electricity and Enlightenment in Early America

A studied consideration of revelations in electrical phenomena in 18th-century America as a cultural counterpart to the Enlightenment in Europe.

Delbourgo (History, Philosophy of Science/McGill Univ.) offers in-depth accounts of early American experiments to determine the nature of electricity—Benjamin Franklin, of course, front and center—characterized by the use of the experimenters’ own bodies as a principal instrument in the process. Needless to say, the tendency of American “electricians” (as those investigating the new phenomena were known on both sides of the Atlantic) to expose themselves and occasional willing volunteers to shocks of indeterminate and largely uncontrollable size makes for some of the most hair-raising records in the history of science. With powerful static charges from the newly discovered Leyden Jar (the prototypical battery) and storm-generated lightning itself as prime sources, injuries and, at times, deaths, were inevitable. But the author is swayed by scholarly intent from fully exploiting or dramatizing these events, being more drawn to examining the results as a collective epistemological experience that won reluctant acceptance for “colonial” science by its “metropolitan” counterpart in Europe in a persistently inflexible hierarchy. The book is still engrossing if read primarily as homage to Franklin and successors like Dr. T. Cole and Elisha Perkins. Franklin’s humility in simply reporting experimental results without posturing or postulating was a key factor in the acknowledgement by Europe that Americans were indeed partners in capturing lightning in a bottle. (Franklin’s concept of positive and negative charges, with a circulating “fluid” constantly seeking equilibrium was, however, on the money at a time when Europeans had little or no clue.) And in a perfect paradigm for the eternal conflict between religion and advancing sciences, the Puritan church initially condemned Franklin’s invention of a successful lightning rod as a blasphemous impediment to the deliverance of Divine retribution.