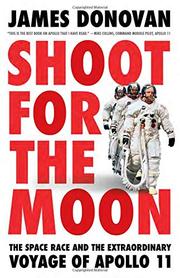 SHOOT FOR THE MOON

The Space Race and the Extraordinary Voyage of Apollo 11

A vigorous exploration of the Space Age, a frontier oddly befitting Wild West historian Donovan (The Blood of Heroes: The 13-Day Struggle for the Alamo—and the Sacrifice that Forged a Nation, 2012, etc.).

The year 2019 marks the 50th anniversary of the arrival of Apollo 11 on the moon and Neil Armstrong’s famous “one small step” pronouncement. That history and the long chain of efforts leading up to the landing have been well-documented, not least by Tom Wolfe in The Right Stuff. Even so, Dallas-based historian Donovan finds fresh things to say about the events—as when, for instance, he recounts Buzz Aldrin’s constant lobbying to be the first to set foot on the moon, a campaign that his peers found tedious but not entirely unseemly. That Armstrong was chosen to lead and then kept in that role, Donovan writes, strongly reflects a priority: “NASA wanted to make a clear statement about the non-military nature of the landing and of the American space program as a whole,” and Armstrong was both a civilian and senior in the hierarchy, making him a natural choice. Aldrin was privately devastated but put up a brave front. In Donovan’s hands, pioneering space scientist Wernher von Braun gets some deliverance from the Tom Lehrer school of lampoonery: True, he’d worked for the Nazis, but he also made remarks about the Hitler regime critical enough to be charged with treason, interrupting his perhaps unlikely playboy lifestyle. Just so, Donovan turns to small but meaningful episodes that speak volumes: NASA’s grudging addition of various lunar experiments “for the science guys”; Aldrin’s ministering of Communion by means of a tiny vial of sacramental wine that he smuggled aboard for the purpose; the fact that only by landing there could we be sure that “the moon’s color…was various shades of gray.” The author closes with the hopeful thought that after a long hiatus, we may soon be heading back into space.

A welcome addition to the literature of space exploration.