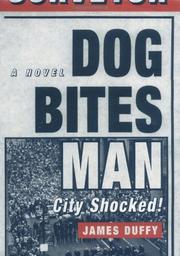 After hiding behind the pseudonym Haughton Murphy for his seven Reuben Frost whodunits (A Very Venetian Murder, 1992, etc.), Duffy jettisons their weakest link—the whodunit—to produce this rollicking tale of the want-of-a-nail that threatens to bring down a New York mayor.

Eldon Hoagland would be nobody’s idea of a mayor if only his competition weren’t so venal and incompetent. Even so, the white-haired former Columbia polical science prof enjoys a long honeymoon until, on his way out of his Princeton roommate Milford Swansea’s apartment, His Honor, drunk as a skunk, accidentally steps on a dog relieving himself near the mayoral vehicle. The dog reacts by biting him; his bodyguards react by shooting the dog and dumping his body into the East River; and the mayor thinks it’s all over except for the itching. But this isn’t just any dead dog: it’s the dearly beloved pet of Sue Nation Brandberg, the formidable Native American philanthropist who’d love to nail the mysterious perps—if only that didn’t mean exposing the only witness, her houseboy Genc Serreqi, to the majesty of the INS. Inevitably, the local press gets hold of the story just as Mayor Hoagland’s about to be identified as the murderer; and, inevitably, the powers who end up arrayed against the mayor turn out to be more powerful, and more unexpected in their wonderfully unprincipled alliances, than just one self-made heiress and her illegal Albanian bedmate. Aided by a supporting cast of totally fictional miscreants all too familiar to anybody who’s ever lived in New York or read a story about it, Duffy has an amusingly catty time savaging the pols, the police, the press, the governor, and the animal-rights lobby. Only a catastrophe that tempers the wind to the unrepentant mayor falls below the general level of effervescence.

Until then, though, Duffy keeps Gotham’s pot merrily a-bubble.