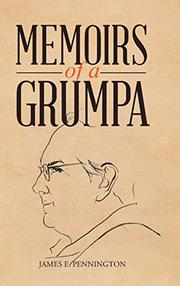 MEMOIRS OF A GRUMPA

After medical school and a career in medical research spanning both coasts and spots in between—Boston, Washington, D.C., and California—in the later years of his career, Pennington found himself with time to assist with babysitting his young grandchildren and explore myriad interests—flying, skiing, acting, writing, and wine tasting. These experiences took him on voyages to San Francisco’s Mission District, Colorado’s mountains, and, terrifyingly, a preschooler’s dance recital. Pennington proved himself not to be the most natural babysitter, sharing with his young granddaughter particularly petrifying scenes from The Shining and inciting his daughter’s wrath. While Pennington pursued some of these interests only after semiretirement and eventual retirement, he studied and collected wine for several decades. His knowledge and experience with wine serve as the focus for the later chapters of the book. Several of the 19 essays, or stories, as Pennington calls them, focus on his and his wife’s trips with their grown children, son- and daughter-in-law, and four grandchildren. Despite the author’s obvious intelligence, he self-deprecatingly portrays himself as often slightly befuddled—perfectly understandable when dealing with young children. Although some of the chapters lead naturally from one to the next, each was clearly written independently, leading to occasional repetition. His easy, natural humor flows through the prose, while his wife Diane’s frequent frustration with him does as well. He chronicles his frugality—telling of his attachment to a 1997 Mercedes and a frayed shirt—but he and his wife are financially well-off, traveling extensively and investing in a wine cellar. Although Pennington may not be completely relatable to all readers, his humility and humor will endear him to most.

An appealing celebration of the joy in basic pleasures—family, travel, and wine.