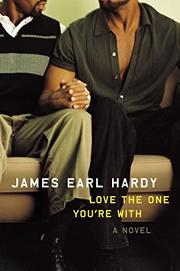 LOVE THE ONE YOU’RE WITH

The fourth installment in a series that began with the startlingly original B-Boy Blues (1994): but Hardy stumbles when he treads into E. Lynn Harris terrain.

After Raheim “Pooquie” Rivers heads to Hollywood to shoot his first film, his partner of 18 months, Mitchell “Little Bit” Crawford, finds himself fending off a string of suitors. Each one is more “phyne” than the last, and a handsome jazz singer named Montgomery Simms just won’t take no for an answer. Hardy is clearly fascinated by the problem of maintaining monogamy in a long-term relationship (the third title in the series, The Day Eazy-E Died, 2001, also dealt with infidelity), so it’s no surprise that Mitchell finally gives in to temptation, but it’s mystifying that the author fails to explore his reasons for straying, or its repercussions. Hardy’s greatest strength has always been chronicling the lives of what he calls “same-gender-loving men,” and he adds subtle shading to the portrait here, revealing how a group of friends functions as a family. The tenderness his characters show for each other, even when disguised by catty comments, is often touching. What’s new, and weaker, is the bisexual plot twist: Mitchell is shocked to learn that Montgomery is equally attracted to men and women. While Harris delves deeply into multifaceted sexuality in his fiction, Hardy skims the surface, handling the topic (like most of those he tackles) with a barely disguised lecture. This time, the professor seems uninterested in the topic and clearly hasn’t prepared for class. The simplistic discussion of “biphobia” in the gay community, tacked on at the end, may well leave readers who have more than a passing interest in the subject feeling largely unsatisfied.

Will appeal to Hardy’s gay male following, though it remains to be seen whether the author can cross over and attract Harris’s larger audience.