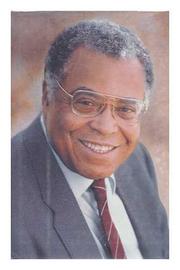 An autobiography in brief, as well as a supremely rewarding text on acting, by the always brooding, green-eyed black actor today best known as the voice of Darth Vader and the steely, saturnine voice of New Jersey Bell. Niven (Carl Sandburg, 1991) worked with Jones for four years on this project, which the thesbian seems to write entirely in his own voice. Jones apparently didn't start out to write a text on acting and perhaps doesn't think of this as such, but budding actors shouldn't leave home without it. Knowing Jones's work, we wait somewhat impatiently for him to get through his early days on the Mississippi farm where he was born and raised and into the exciting worlds of stage and film. But those early days are Jones. Parted from his father and mother and raised by his grandparents, he began to stutter as a child, then fell into a muteness that lasted until a high-school teacher had him read a poem aloud and he found that he could read fluently from a text. What's more, his awakened voice had deepened. (The muteness may account for the great intensity of Jones's listening when he acts.) He spent a decade playing innumerable roles Off-Broadway and in regional theater before his breakthrough with Joseph Papp's Shakespeare in the Park troupe. Long enthralled by Othello, he has played the role in many productions, each of which he analyzes here for new ideas about who the Moor is and how to play him. Best moments overall include the lessening in scope and power of The Great White Hope from Washington to Broadway to film; the difficulty of wrestling a better text out of Angus Wilson for Fences; and stone-sucking thoughts about Jones's feelings and passions in his various roles. A star is born among the classics on acting. (Three eight-page photo inserts—not seen)