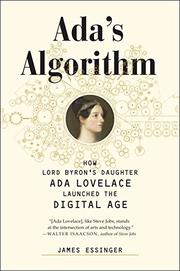 The story of Ada Lovelace (1815-1852), the brilliant mathematician and the daughter of the poet Lord Byron, who likely wrote the first computer program in the early 1840s. Due to her gender, however, her research was overlooked, and another two centuries passed before computers became a reality.

Despite the fact that Ada was Lord Byron’s only legitimate daughter, her mother deemed him unfit to raise her and left him when Ada was just 1 month old. Her father’s reputation made Ada famous by association, and throughout her life, this recognition connected her with some of the era’s most interesting and accomplished people, including the mathematician Charles Babbage. As a child, Ada was fascinated by mathematics and demonstrated an “imaginative approach to science.” Through sheer force of will, she managed to obtain an education rarely available to women in the 19th century and was therefore able to recognize the profound potential in Babbage’s lifelong obsession, a machine he called the “Analytical Engine,” designed to make calculations. Babbage considered his invention to be purely mathematical, but Ada realized that the possibilities were much grander—that the machine could be capable of “weav[ing] algebraical patterns,” a sophisticated idea that did not yet exist at the time. In her writings, she clearly laid out these early concepts of computer science, but because she was female, she was essentially ignored. Essinger (Spellbound: The Surprising Origins and Astonishing Secrets of English Spelling, 2007, etc.) presents Ada’s story with great enthusiasm and rich detail, painting her life as one that was rich with opportunity and access but stifled by sexism. Ada continues to inspire, and by using her own voice via letters and research, the author brings her to life for a new generation of intrepid female innovators.

A robust, engaging and exciting biography.