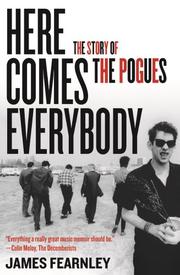 The Story of the Pogues
by James Fearnley
BUY NOW FROM
AMAZON
BARNES & NOBLE
LOCAL BOOKSELLER
GET WEEKLY BOOK RECOMMENDATIONS:

A founding musician in one of Ireland’s most raucous, poetic and punk bands remembers the highs, lows and plateaus of the golden age of combat rock.

It’s really only the first half of a continuing story, but it’s the right half to tell. Fearnley just narrowly escaped becoming a permanent member of Culture Club when band mate Jem Finer invited him to become a member of The Nips, later changed to Pogue Mahone and then simply The Pogues. Led by the irreverent, inebriated and often diabolical singer Shane MacGowan, the band toured hard for a decade in the wake of their 1984 debut “Red Roses for Me.” Fearnley makes readers feel every mile. For fans of the band, it’s a detail-rich, expressive remembrance not only of the many gigs where someone had to pull MacGowan off the ceiling with a rake to get him to play, but also of the remarkable musical gumbo that produced fantastic songs like “If I Should Fall from Grace with God,” “Rainy Night in Soho” and the holiday classic “Fairytale of New York,” a duet with the late Kirsty MacColl. Along with fascinating glances at contemporaries like Elvis Costello and Joe Strummer, the book also offers a cleareyed and unforgiving assessment of MacGowan’s path of self-destruction. “Shane’s drinking was a more venerable enterprise, a swath cut by the likes of such writers as Brendan Behan and Dylan Thomas, not to mention Faulkner, Chandler, Fitzgerald and O’Neill,” writes Fearnley. “More and more the question on people’s lips was whether Shane wrote so beautifully because of the amount he drank, or despite it.” But neither is the author afraid to point his insights at himself, relating his own struggles with music, women, drink and combat with his musical mates. Clearly, this talented musician has taken a page from Keith Richards’ marvelous biography: Believe it or not, he remembers everything.

Anyone who survived The Pogues deserves one last drink after the war.

CRUEL TO BE KIND
by Will Birch
Nonfiction