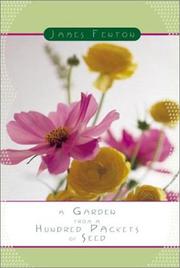 A GARDEN FROM A HUNDRED PACKETS OF SEED

Fenton’s highly personal musings on gardening with flowers that can be grown from seed.

In what must be a labor of love—or perhaps an effort to conform to as many English stereotypes as possible—former Oxford professor, gardener, and author Fenton (Leonardo’s Nephew, 1998) here sets down a wish list of 100 types of flowers to try growing in “a blank slate of a garden.” Blatantly flouting current gardening convention, Fenton eschews the tedium of planning a plot’s “bones,” or layout, in favor of growing flowers that simply appeal to one for their own sake. Dreaming of yards that allow for whimsy and chance, he runs through short descriptions of flowers he has known and found intriguing. There is the Himalyan Balsam (#47), “which grew to around six feet, had flowers like pink coal scuttles, and smelt of 1950s hair oil,” and the Spanish poppy (#69), which “hangs around the back door, returning year after year, looking after itself.” Plants are sorted into chapters according to their color, size, tendency to migrate, and ability to look good when cut and displayed in a vase. Fenton duly notes gardening publications he finds interesting, gardens he has grown in the past, and his frustrations with such bromides as the injunction that growing meadow flowers requires gardeners to lower the fertility of their soil. For those who want to cut to the chase, a list of the hundred flowers is appended to the end, along with a short bibliography that includes seed catalogues, and a handy how-to guide to growing flowers from seed. A guide for people who know flowers—not so much a starting point for novices interested in exploring.