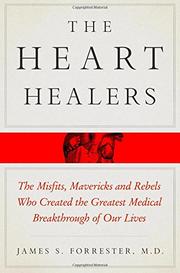 The Misfits, Mavericks, and Rebels Who Created the Greatest Medical Breakthrough of Our Lives

A scientific memoir/biography of the significant achievements of heart doctors through the years.

Forrester (Medicine/UCLA) is the former chief of the division of cardiology at Cedars-Sinai and a recipient of a lifetime achievement award from the American College of Cardiology, so he is more than qualified to tell this story. For most of his subsequent career as director of one of the National Heart, Lung, and Blood Institute’s Centers for Research in Ischemic Heart Disease Center, he has been directly involved in a series of astonishing medical advances. In the early 1990s, he led a team that developed coronary angioscopy, a medical technique for visualizing the interiors of coronary arteries by inserting a flexible catheter directly into the artery. In the 1960s, at the start of his career, the treatment of patients experiencing a heart attack was primitive as compared to today. “More lives were being lost in a single year than in all of World War II,” writes the author. Today, heart disease is surgically treatable and in many instances preventable with the help of diet, exercise, and cholesterol-reducing drugs. Open-heart surgery, the first of the advances he chronicles in the readable, accessible narrative, occurred in 1944. Dwight Harken, at the time a daring battlefield surgeon, performed the first successful open-heart surgery to remove shrapnel. The adaptation of the operation in peacetime involved improved diagnostic tools, including the development of a heart-lung machine. With the new tools and methods, the mortality rate for congenital heart surgery has decreased from 50 percent to 2 percent. Another major milestone, writes Forrester, was the introduction of “coronary artery bypass graft surgery” in 1967. It dramatically reduced angina (pain indicative of a potential heart attack), but as one of his students discovered, it was the suddenness of an occlusion, not gradual blockage, that caused a heart attack. Throughout the book, the author achieves a nice balance of memoir and scientific history.

A heartwarming account of risk-taking, iconoclastic doctors who achieved extraordinary cardiovascular breakthroughs and of the patients who trusted them.