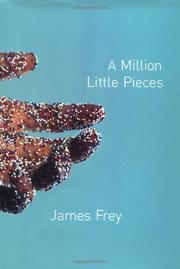 After ten years of alcoholism and three years of crack addiction, the 23-year-old author awakens from a blackout aboard a Chicago-bound airplane, “covered with a colorful mixture of spit, snot, urine, vomit and blood.” While intoxicated, he learns, he had fallen from a fire escape and damaged his teeth and face. His family persuades him to enter a Minnesota clinic, described as “the oldest Residential Drug and Alcohol Facility in the World.” Frey’s enormous alcohol habit, combined with his use of “Cocaine . . . Pills, acid, mushrooms, meth, PCP and glue,” make this a very rough ride, with the DTs quickly setting in: “The bugs crawl onto my skin and they start biting me and I try to kill them.” Frey captures with often discomforting acuity the daily grind and painful reacquaintance with human sensation that occur in long-term detox; for example, he must undergo reconstructive dental surgery without anesthetic, an ordeal rendered in excruciating detail. Very gradually, he confronts the “demons” that compelled him towards epic chemical abuse, although it takes him longer to recognize his own culpability in self-destructive acts. He effectively portrays the volatile yet loyal relationships of people in recovery as he forms bonds with a damaged young woman, an addicted mobster, and an alcoholic judge. Although he rejects the familiar 12-step program of AA, he finds strength in the principles of Taoism and (somewhat to his surprise) in the unflinching support of family, friends, and therapists, who help him avoid a relapse. Our acerbic narrator conveys urgency and youthful spirit with an angry, clinical tone and some initially off-putting prose tics—irregular paragraph breaks, unpunctuated dialogue, scattered capitalization, few commas—that ultimately create striking accruals of verisimilitude and plausible human portraits.

Startling, at times pretentious in its self-regard, but ultimately breathtaking: The Lost Weekend for the under-25 set.