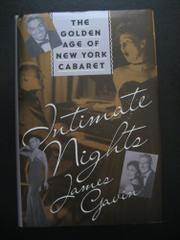 What the Manhattan nightclub scene was like from the late 40's through the 60's, with notes on the 70's and 80's. Show-biz folk and fans should find this a nostalgia-packed, glittering earful, though many readers will find themselves reading an endless Rex Reed column full of passing celebrities and revues whose identities self-destruct in the reader's mind but who nonetheless deserve the minor monument of this book. Irreverence distinguished the postwar clubs from the prewar, with entertainers no longer satisfied with simply entertaining—they wanted to put a spin, an edge, on their work. Gavin is rather moving about Spivy Le Voe, a squat and lacquered patter songstress who sometimes owned clubs like Spivy's Roof that featured Mabel Mercer and were smash successes; Spivy was called the ``Bulldog Bulldike,'' lost her last lease in the early 50's, wound up doing movie bits, and died at the Motion Picture County Home and Hospital in California. Top acts were Mike Nichols and Elaine May, Woody Allen, Mort Sahl, Lenny Bruce, Joan Rivers, Bobby Short, Dick Gregory, Barbra Streisand, and Bette Midler, while lesser stars Ronny Graham and Paul Lynde shone in outrageously satirical revues at Julius Monk's prestigious cabarets. Monk was a weird North Carolinian who passed himself off as a hybrid Englishman/southerner in Edwardian suits but whose revues at the Up-Stairs at the Downstairs and the Downstairs at the Upstairs were unrivaled—until Monk was replaced by club owner Irving Haber with madly outrageous producer/director Ben Bagley. Gavin concludes with a look at how the top stars began to play supper clubs, and at the emergence in the 80's of new top-dollar acts like Peter Allen and Lainie Kazan. No big audience but a worthy work.