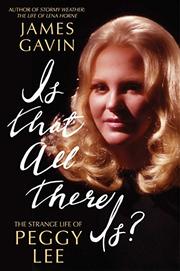 IS THAT ALL THERE IS?

The Strange Life of Peggy Lee

The sad, troubled life of the popular jazz singer.

Peggy Lee (1920-2002), born Norma Deloris Egstrom, grew up in North Dakota, raised by an alcoholic father and mean stepmother. Yearning to be the center of attention, she wanted to be a movie star. By the time she was 15, she realized that her natural singing talent might get her out of the prairie. “She would have done anything to become famous,” a friend told music journalist Gavin (Deep in Dreams: The Long Night of Chet Baker, 2002, etc.). The author’s research is impressive: He has interviewed scores of people who knew Lee, worked with or for her, or witnessed her performances; he cites and assesses songs she recorded, performed and wrote; he follows her love affairs, however brief, and her four brief marriages. What he learns, however, proves repetitious: She was a vulnerable woman so frightened of performing that she downed a considerable amount of cognac before sweeping on stage; soon, alcohol was supplemented with Valium and Quaaludes. She was a demanding, selfish employer. She was deeply lonely. Her musicians, Gavin was told, “were her family….She kept them from leaving her after each show, which caused some problems with those who had wives or a life and didn’t want to hang out until the early morning hours.” On stage, she won praise for her “economy of movement.” She explained her stillness: “I just stood there because I was too scared to move.” She admired Billie Holiday, but the feeling was not mutual. She was a hypochondriac and a devotee of the Church of Religious Science, and she tried all manner of fad diets in an attempt to control her burgeoning weight. Her career had its ups and downs: Some of her songs—“Fever,” for example—made her famous, but some flopped.

An overly detailed biography that Lee’s die-hard fans will welcome.