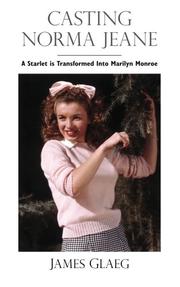 A Starlet is Transformed Into Marilyn Monroe

Providing a dramatic approach to a factual commentary drawn from a variety of sources, Glaeg paints a portrait of Norma Jeane as a plain but pretty girl with starry-eyed ambition. From her nearly disastrous screen test, she’s shepherded toward fame by a bevy of handlers, including the makeup artist who transforms her face and the executive who bestows her legendary new name. Before she’s famous, however, Norma Jeane faces the casting couch and her own family’s disapproval—save for a few supportive aunts—over her chosen career. The narrative describes the three women who raised her, even as her own mother disappeared into a mental institution. Far from being merely the “blonde of the day,” Norma Jeane ultimately proves herself worthy of Hollywood stardom, with a mixture of radiant inner beauty and the keen ability to adapt to the role. The transformation is marked by a paradox: She’s simultaneously a fabrication and an honest soul. The author makes no direct comments on the emotional and psychological toll of such a transformation, but the reader observes her divorce, her mother’s disapproval and the slow dissolution of a close relationship between Norma Jeane and her half sister, Berniece. For those expecting glamour and glitz, this biography offers little of the Tinseltown sparkle; darker subjects are equally glossed over, including Marilyn’s secret apartment for meeting men who could help push her career in the right direction.

Fans will appreciate this modest look at how a star is born, raised and nurtured before she goes supernova and, eventually, collapses.