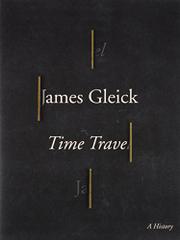 A kaleidoscopic look at the concept of time travel.

In his latest book, award-winning author Gleick (The Information: A History, a Theory, a Flood, 2011, etc.) turns his meticulous attention to the idea of time travel, among the thorniest and most beloved sci-fi plot devices that have some possible resonance in scientific theory. As the author adeptly shows, simply assessing the “flow” of time is a tricky exercise that has occupied everyone from Aristotle to Einstein. Inevitably, subsequent questions regarding the plausibility of time travel took hold in the fertile minds of fiction writers. Gleick shares scores of fascinating quotes and excerpts from such greats as Borges, Asimov, Proust, and Calvino, but he also introduces many other poets, philosophers, scientists, and film and TV characters whose musings reflect contemporary culture’s evolving sense of self in a rapidly advancing (space)time. Evidently, there is much concern about what would happen to one who traveled back in time and killed a grandparent; more serious concerns about free will and eternity were also implicated in ideas of malleable time. In the age of the internet, the author argues that modern technologies such as social media networks further complicate the familiar past/present/future trajectory by troubling chronology and defining “internet time” as a present slightly more communal than it used to be. “In the wired world,” he writes, “creating the present becomes a communal process. Everyone’s mosaic is crowd-sourced, a photomontage with multiple perspectives.” The author merges centuries of thought seamlessly into his discussion. From Wells to Schrödinger to Twitter, he doesn’t miss a beat, and he imparts a wry appreciation for humorous detail, making him one of the most enjoyable science writers in the field.

Though not his best book, this is another fantastic contribution to popular science from Gleick, whose lush storytelling will appeal to a wide range of audiences.