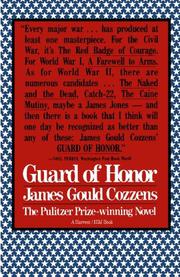 To anyone whose memory of James Gould Cozzens' earlier work is still green, it it welcome news that, after too long an interval, there is another book from him. Just as each of those books was sharply individual, so this one stands alone, on its own merits. He has done what, to most of us, would have seemed an impossible achievement. He has written an absorbing novel about a Florida Air Base; he has brought into sharp relief against the background of boredom and frustration and disappointment which most of the officers assigned there felt,-the little dramas of human lives, loves, hates, jealousies; the competitive spirit leveled at minor goals; the interrelation of men, whose ranks are more or less the accident of the chance of war. The C.O., General Beal, younger than most of his staff, is a vital figure, torn by his friendship for a difficult junior officer, eternally in hot water, disturbed profoundly by the necessity of playing off local prejudices re the color line against the directives from Washington, attempting to be human and at the same time the martinet military procedure demanded. The major issues motivate the story:- the problem of the Negro officers and the officers club; the disaster attendant on the trials of parachute jumping — and the question of blame. Nathaniel Hicks, in private life an important man in the magazine world, is the person through whom much of the story is seen —and his own private adventure with the WAC, Lieutenant Turck, bears evidence to the tensions, the conflicts, incidental to the artificialty of the life of civilians at war. Character after character comes clear- small bits as well as large. There's implicit in the whole the kind of drama Command Decision provided — against a setting that is infinitely less provocative of dramatic treatment. A long book- not always easy reading- with many subplots- with minor incident piled on minor incident- but the whole building up to an unforgettable pattern. Cozzens writes with a taut violence at times; and at other times with an expansive warmth — an unusual combination which makes for roundness of impression.