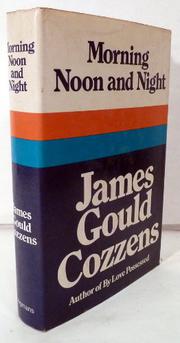 Backward, ever backward, through sentences which sinuously, sonorously curl around parenthetical phrases and elliptical clauses, "vagariously" winds this retrospective of the life of Henry Dodd Worthington as now through "experience's actual disorder and inconsecutiveness" he tries to reconcile himself as he was (sufficiently remote to elicit a third person referral) with the man he now is in late middle age. . . . This doubtful construction is only intended as a warning to readers of Mr. Cozzens' new book which is his first novel in ten years and in which he has completed his mastery of the involute sentence. (Ibid.: "Heart conturbed, with dissolution's icy wind on him he does not, he cannot, elect to look ahead and, trembling, prefigure in the final gloom of night the river's calamitous sliding without intermission over the rock edge and wreathed with spray and vapor thundering down.") For those not by patience possessed, trying. . . . En avant—with Cozzens' Last Puritan as he assembles the parts of his life which, with a certain amount of grave questioning and judicious qualifying, have been important in this spectator-participant's total experience: his birth from a long line of acknowledged academic eminence and material affluence; his grandfather, seer and sage, who lived until 99 and repudiated Freud; his first seduction—an "unnerved unable blushing boy" at the hands of-an older woman; his marriage and divorce; his impatience with the marital capriciousness of his' daughter; his own ingenuous stance as a young man who found the workaday world of money unrelated to real life and its later reversal as via a Mind Power course he achieved a Madison Avenue empire, etc. etc. This reflective reconnaissance of "the kinds of unknowing in individual human experience" if parsed and pursued to its conclusion some six lines later, is intended to have "meaning for every man." Perhaps for Mr. Cozzens' admirers, although in Henry Dodd Worthington he seems to have removed himself to a considerable degree from his time and ours.