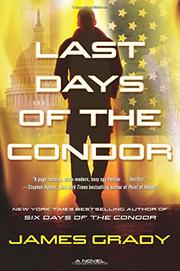 LAST DAYS OF THE CONDOR

Having captured the spy culture of the paranoid Cold War era in his 1974 novel Six Days of the Condor (filmed as Three Days of the Condor with Robert Redford), Grady now depicts the convoluted, cutthroat state of intelligence in the post-9/11 world.

All these years after achieving notoriety as a CIA whistle-blower, the silver-haired Condor lives on the edge of reality. Put on meds for every conceivable kind of post-traumatic disorder following a heart attack, he's visited by ghosts and gets "lost in time." When a distrusting federal agent assigned to monitor his recovery is found brutally murdered in Condor's apartment, Vin—as the protagonist is also called, after Steve McQueen's character in The Magnificent Seven—is the prime suspect. But Faye Dozier, a former CIA agent now "in limbo" at Homeland Security, knows he's not a killer. She becomes his running and gunning partner as unknown assailants, including the unstoppable Monkey Man, swarm after them on the streets and subways of the nation's capital. To different ends, unexpected romantic partners impact the lives of both Condor and Faye, in Vin's case helping him in his efforts to recover his lost self. For a spy novel, the book is oddly short on plot, but Grady's prolonged action scenes are terrific, and the bounding energy of his writing carries you along the rest of the time. It takes a while to adjust to the rhythms of his terse, stream-of-consciousness style, which is halfway between the POW! and WHAM! of comic books and the cryptic language of cyberspace, but the effort is rewarded.

Grady's anti-heroic spy returns in fine form in an up-to-the-minute novel to which the author, a former Washington investigator, brings plenty of insider knowledge.