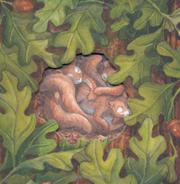 Rohmann sets a short lullaby from an early-20th-century poet and printer to brushy watercolor scenes of a family of lightly anthropomorphized, bright-eyed squirrels frisking about a grassy, sunlit glade before returning to their cozy nest to sleep. Because the text is so brief that many spreads have just a single word—or none at all—this reads like a short film captured on paper, its pacing governed by the timing of page turns. The poem may be brief, but Guthrie’s language is simply gorgeous: “To the milk-white / Silk-white / Lily-white star, / A fond goodnight / Wherever you are.” The book’s wee trim—it’s a snug seven-by-seven–inch square—emphasizes the intimacy of both words and art. The illustrator has done this sort of thing before, of course, most notably in his Caldecott-winning My Friend Rabbit (2002); here the art is lighter in line and color but just as joyful. A die-cut front cover provides an inviting gateway to an idyll that will tempt viewers to linger. (Picture book. 3-5)