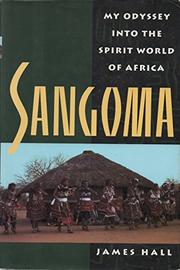 An Odyssey into the Spirit World of Africa

Take a journey to Ixtlan—by way of Swaziland—in this verbose, self-conscious narrative by the only white man to have ever become a sangoma, a traditional African healer. A former television writer and co-author of Makeba: My Story (not reviewed), Hall spent two years learning how to summon his lidlotis, the spirits of the dead who emerge to possess his body during nightly rituals. As a sangoma-in-training, Hall accumulates eight spirits, including those of a distantly related Scotsman, an American Indian, a fetus (who encourages him to have his own child), and a most incongruous 1930s ad man named Harry, who conversationally tells Hall it was he who thought of the slogan ``Lucky Strike Means Fine Tobacco.'' Under the tutelage of senior sangomas, Hall digs for medicinal roots; reads animal bones to diagnose physical and spiritual ailments of his patients; bathes in goat blood; and divines the location of hidden objects before admiring tribespeople. Yet all is not rosy, since Hall faces grudging acceptance by the community and is perpetually plagued by foot infections arising from nocturnal barefoot dancing while under the thrall of his lidlotis. A self-described former ``casual'' Catholic, Hall continually confronts his own doubts about the legitimacy of his experiences. Is he schizophrenic, he wonders? Would anyone back home in the States believe him? Is he worthy of being a sangoma? After easily resolving these questions through a fairly insignificant encounter with a colorful troubadour, Hall undergoes his final ritual tests (which include a vomiting contest) and becomes a full-fledged traditional healer. Hall's prose drips with hackneyed phrases such as ``muscular mountains'' and ``ineffable sadness,'' and while he faithfully describes his ritual training, the details can become wearying, particularly the daily digging and grinding of sacred herbs. Readers curious about this vanishing tribal practice may find Hall's book informative, as will glossolaliacs who will appreciate his lidlotis utterances. (8 pages of b&w photos, not seen)