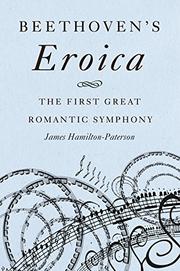 Novelist and nonfiction author Hamilton-Paterson (Blackbird: The Story of the Lockheed SR-71 Spy Plane, 2017, etc.) delves into the cultural and historical impact of Beethoven's groundbreaking third symphony, the “Eroica.”

It is difficult to imagine what it must have felt like for the first listeners of the legendary composer’s third symphony, a work that changed the game for all music thereafter. To modern ears, it may not sound radically different to previous "classical" works of Mozart or Haydn. However, at the time of its first performance in 1804, nothing like it had ever been heard before, to the extent that even the musicians thought there must be mistakes in the score. The author takes readers back to that time, and earlier, with a detailed history and biography of the composer and the events and people who shaped his writing. Hamilton-Paterson addresses the ongoing question of Napoleon's influence on the composition—which, at one point, was dedicated to him by Beethoven—acknowledging the difficulty of interpreting the composer's intent while maintaining that understanding the historical and personal context "adds much interest" to the work for its audience. Along with the shadow of Napoleon, the myth of Prometheus and the personal tragedy of Beethoven's worsening deafness loom over the creation of the “Eroica,” which the author traces from before its composition, through its initial reception, to its lasting influence. Hamilton-Paterson also offers detailed musical analysis of the work, and though he helpfully provides definitions and background for many of the musical forms and structures discussed, a working knowledge of music theory and classical music history will serve readers well—though novices with an interest in the material should not be deterred.

A valuable guide to one of the most remarkable works of a musical giant whose undeniable genius continues to resonate centuries after his death.