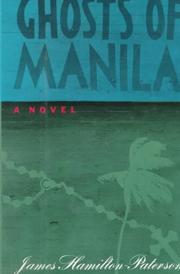 Set in post-Marcos contemporary Manila, this novel from versatile British writer Hamilton-Paterson (The Great Deep, 1992, etc.) is riveting as a work of docufiction but less satisfying as a conventional novel. A part-time resident of the Philippines, Hamilton-Paterson has a familiarity with local politics, customs, and history that gives his subtext—a country infected by deadly corruption—an impressive journalistic authority. The Manila he describes is a wasteland of cesspools, slums, sexual exploitation, and sweatshops where, with rare exceptions, everything and everyone has a price. Former British filmmaker John Prideaux, in his 40s, has taken up anthropology and is in Manila to explore what makes a society run amok. Fellow Brit, aristocratic Ysabella Bastiaan, an archaeologist, has come to work on a local dig. More a vehicle for the plot than a credible character, she is thinly drawn, as indeed are most characters except for Inspector Rio Dingca, Manila's only honest cop. The story, in which desperate squatters living on the margins are deliberately murdered and terrorized by a ``vampire'' employed by Lettie Tan, a local bordello owner, drug dealer, and entrepreneur, is secondary to Hamilton-Paterson's indictment of the Philippine government. Characters describe how children are kidnapped for prostitution; how hundreds of workers are left buried in concrete in Imelda Marcos's grandiose cultural center; how the important archaeological find located in the squatters' slum will be cynically preserved in the midst of the planned upscale mall; and how police, tired of corrupt judges and lawyers, take justice into their own hands and deliver criminals they have executed illegally to a Chinese ``pie-factory'' that renders their bodies into skeletons for export. Memorable insights and much vivid writing are not enough to give life to a flimsy story overwhelmed by an enormous and urgent mission. A pity.