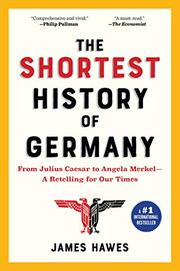 THE SHORTEST HISTORY OF GERMANY

From Julius Caesar to Angela Merkel--A Retelling for Our Times

A fast-moving encapsulation of German history focusing on the thesis that Prussia’s aggression was a short-lived anomaly in the big picture and not reflective of the true German spirit.

German-steeped British academic Hawes (Creative Writing/Oxford Brookes Univ.; Englanders and Huns: The Culture-Clash Which Led to the First World War, 2014, etc.) imparts plenty of useful information in this handy history for students looking to define a sometimes-inscrutable people with a tainted recent past. At the beginning, the author implores readers to “throw away a great deal of what we think we know about German history, and start afresh.” First, he reminds us that “Julius Caesar had invented the Germans,” that is the barbarians who lived east of the Rhine who differed greatly from the Romans, who, according to Tacitus, “had degenerated into a people made soft by vice and luxury, who merely groveled to their emperors.” Hence the beginning of the rather romantic character of Germans as wild and noble tribesmen on the frontiers. Hawes sees the birth of Germany as we know it with the partition of Charlemagne’s kingdom into West Frankish (France) and East Frankish (Germany); the practice of “electing” a king—Conrad in 911 C.E.—meant much of the subsequent German history was “one of a permanent battle between royalty and high nobility.” The author traces how the separation of west Germany from what was known as East Elbia occurred with the rise of the Junkers (“young lords”) and the increasing militarization of “muscled-up” Prussia under Frederick the Great, leading Prussia to its bellicose apotheosis from 1866 to 1945—“the great deformation,” asserts Hawes. The true liberal democratic spirit of the robust, enterprising Germans resides in the west, rather than the east, now again courting right-wing parties.

A marvelously concise effort, especially compelling as Angela Merkel is set to step down in 2021, leaving an uncertain vacuum in Europe.