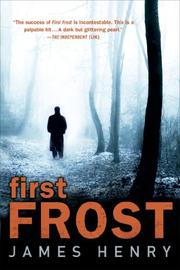 Publisher James Gurbutt and crime reviewer Henry Sutton team up as James Henry to give readers another crack at R.D. Wingfield’s Jack Frost, hero of the long-running British television series A Touch of Frost.

The latest Frost is actually an earlier incarnation, working under Stanley Mullett as the newly minted superintendent tries to manage the “overstretched and under-resourced” Denton Division. His two detective inspectors, Jim Allen and Bert Williams, are out of action. Allen is on a walking tour in the mountains, and Williams is simply missing. That leaves Mullett his two detective constables, aging Arthur Hanlon and young, energetic Sue Clarke, along with DI Jack Frost, to deal with a rash of crimes that would stagger hardier forces. First, teenager Julie Hudson is snatched from a dressing room at Aster’s. Next, Julie’s mother, Wendy, is beaten nearly to death. Then, Vanessa Litchfield, a teacher at Julie’s school, finds a body in Denton Union Canal. Not to be outdone, single mom Liz Fraser reports that her toddler, Becky, has been attacked by a wild animal. Frost responds to these emergencies by turning off his police radio, revving up his Cortina and defying everyone, including his beleaguered boss, to rein him in. He stashes Becky Fraser in the hospital by launching a story of a rabies threat, browbeats the head of St. Mary’s School for Girls into telling more than she’d like about Ms. Litchfield, interviews and re-interviews anyone remotely connected to Julie Hudson. But as the bodies pile up and the threat level goes nuclear, Frost focuses more on Williams’ disappearance as the key to Denton’s crime wave.

Gurbutt and Sutton pack enough incidents into their prequel to generate an entire season of A Touch of Frost. Die-hard Frost fans will be pleased, but neophytes will more likely be sent into shock.