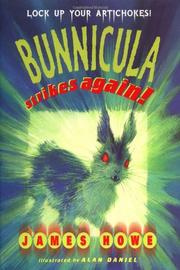 Once again Harold, “canine author extraordinaire,” relates a madcap tale lit up with clever character twists and plots going hilariously awry. Convinced that his long-eared nemesis is up to something, Chester the cat hopes to weaken Bunnicula by drinking his carrot juice on the sly. To Chester’s dismay, the worried Monroes cart their suddenly lethargic bunny to the vet’s, touching off a merry chase that includes a suspicious Harold and the subintellectual Howie. Adding cameos of feline ne’er-do-wells Felony and Miss Demeanor, plus other characters from previous books, Howe (Rabbit-Cadabra!, 1993, etc.) flogs the plot along to a melodramatic climax; Chester and Bunnicula are caught up in the demolition of the old movie house in which Bunnicula was first found, and are seen plunging into oblivion together. By the time the two are pulled safely from the rubble, Chester has suffered an astonishing change of heart, and Howie expresses literary ambitions—developments that fans of this long-running, and deservedly popular, series will view with approval, or alarm. (b&w illustrations) (Fiction. 10-12)