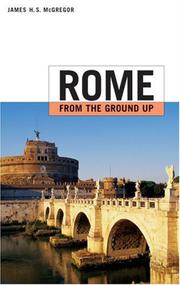 ROME FROM THE GROUND UP

A pleasing history of Rome from antiquity to the modern era, tied to monuments, buildings and other structures throughout the city.

The heart of Rome is the Tiber River, and there McGregor (Comparative Literature/Univ. of Georgia) begins. “Like all too many urban rivers,” he writes, “it lies far below street level in a deep and narrow chasm, visible from above but almost out of reach.” Not quite; the homeless get to it easily enough. But the point is well taken; the Tiber stands as a rebuke in a city full of splendors but also of graffiti and litter, one that is “being internationalized at an unprecedented pace” and made ever more chaotic with bigger and more numerous motor vehicles. Step away from the river, and McGregor’s tour of the city becomes calmer and more reflective, and even longtime students of Roman history stand to learn something from his pages. Among the lessons offered along the way: The Basilica Julia represents a major urban renewal project on the part of Julius Caesar, who bought up a big chunk of the ancient Forum at “Manhattan prices” (whether of Pieter Minuit or Donald Trump we do not know) for the purpose. The Piazza di Spagna is so named because the Spanish embassy was once located there, and with it the office of the Institute for the Propagation of Faith—for it made sense for the proselytizers to associate with busy conquerors. Benito Mussolini engineered some urban renewal of his own, clearing out hundreds of houses in order to make his grand Via del Impero. And so on, in a wealth of detail and with well-chosen illustrations. Well worth consulting before planning a tour of the Eternal City.

McGregor might have spent more time—or time at all—on certain well-known points on the Roman map (the Campo dei Fiori, the Gardens of Sallust, the Baths of Caracalla), but Georgina Masson’s Companion Guide to Rome (1974) fills in the blanks.