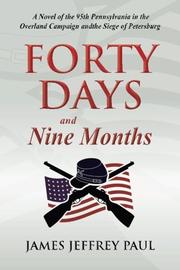 In this gripping novel, Paul (Nothing is Strange with You, 2008) chronicles bloody Civil War battles fought by the 95th Pennsylvania regiment.

As the novel opens in May 1864, the 95th Pennsylvania Volunteers have dwindled from the infamous “Original Twenty-Five” to just 12. These young men, encamped in Virginia, introduce themselves in an opening sequence that relies on formulaic descriptions (“a twenty-two-year-old typesetter and aspiring journalist from Philadelphia”) but benefits from rollicking dialogue (“Oh, I’ll tell you about it soon.” “When? When we’re all dead and buried?”). Although Paul includes real-life historical figures in the story, such as Gen. Ulysses S. Grant, he invented these dozen major characters. As the soldiers each discuss heroism and self-abnegation, they develop distinctive personalities. Their tone is often one of philosophical resignation—when “[g]ood men get killed every day,” “it ain’t always important whether you live or die,” one insists—but some soldiers are also devout religious believers, praying for God’s mercy for themselves and the Confederates. Paul effectively recreates the atmosphere of wearisome marches and gory warfare, and his combat scenes are matter-of-fact and graphic: There are gunshot and bayonet wounds but also crushed testicles and teeth-torn throats—as well as an unexpected erection in a scene of uncomfortably sexualized violence. The narrative often shifts to a single character’s perspective, only to have him suddenly shot to death. Such unsentimental bluntness, however, contrasts with Paul’s overall concern for his characters’ psychological back stories; Abbot, for instance, longs to join an English theater troupe, while Greisler is terrified of fire. The novel’s finest chapter details a wounded soldier’s struggle to escape an eerie forest and rejoin the company, and it balances irony and tragedy perfectly, juxtaposing tender flashbacks of the soldier’s prewar life against the blood-soaked present. As the novel concludes, with just a “quartet of survivors” remaining to parade through Philadelphia, the sadness is tempered by the prospect of new life ahead: “[Babcock] resumed walking forward—or backward—or sideways, or up and down—into what looked like the future.” Paul’s canvas may be limited in this novel, but his talent could easily sustain future works of epic historical fiction.

A brief, powerful historical novel that reflects on the beauty and brutality of life in wartime.