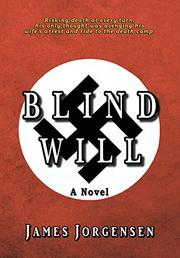 In Jorgensen’s (Where Did My Money Go?, 2009, etc.) historical novel, a German vows revenge on the Nazis when his wife is arrested for her Jewish ancestry.

In 1944, Karl Hecker works as a clerk for the Foreign Ministry in Berlin, where he suffers the difficulties of war on the homefront, including food shortages, bombing raids, and fear of invasion by the Soviet army. A Nazi background check reveals that Anna, his wife, had a Jewish grandmother—a genealogical fact of which she was unaware. As a consequence, the Gestapo arrest her and ship her off to a labor camp, where she’ll almost certainly die. Karl is cleared of any legal wrongdoing, but he’s heartbroken by his loss and becomes obsessed with the idea of retaliation. His employers rightly suspect him of stealing classified documents at work, and as he realizes how precarious his situation is, he also figures out a way to punish Hitler’s despotic regime. (Jorgensen expresses Karl’s revelation in characteristically anodyne prose: “I took another look at the papers on my desk. I could hardly believe it. Here was a way to screw the Nazis!”) Karl decides to furtively deliver top-secret materials to the Allies via a contact in Bern, Switzerland—an old Jewish friend of Anna’s, professor Frederick Meinberg; in order to arrange the trip, he begins an affair with a colleague, Maria Moser, who has powerful family connections to the Nazi party and control over a network of couriers. As he makes the dangerous trip, he hopes to score cigarettes, which are invaluable on the black market, and maybe secure a way out of Germany for both himself and Maria before the Soviets arrive. The author’s knowledge of the historical period—and in particular, the lives of average German citizens during the war—is impressive. He affectingly depicts a world contaminated by suspicion, in which many lived in constant fear of harassment—even those without ties to the Jewish community. Despite the bombardment of propaganda, most Germans understand that a violent end to Hitler’s aggression is soon to come. Jorgensen movingly describes Karl’s anguish and irrepressible resolve as a kind of mini-revolt against an entire political machinery of tyranny. The novel’s drama, though, is undermined by bloodless prose, as well as by some weaknesses in the plot. For instance, Karl must curry favor with Maria in order to arrange his initial trip to Bern, but she seems to risk quite a lot in order to have lunch with a man whom she doesn’t know and shouldn’t trust. Karl also decides to disclose his meeting with Frederick Meinberg to the head of security at the German embassy in Bern, falsely claiming a professional obligation—a foolish lie that places him in grave danger. However, the historical authenticity of the story as a whole and the inspiring resoluteness of its protagonist still make for a thrilling read.

An often engaging look at Germany in the final throes of Hitler’s rule, despite some flaws in its execution.