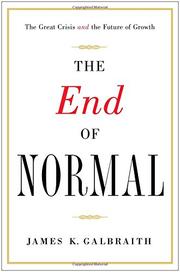 THE END OF NORMAL

The Great Crisis and the Future of Growth

A renowned economist argues that the days of easy growth and full employment are over.

Following the crisis of 2008, economists scrambled to “explain” the financial meltdown, variously blaming the government, banks or income inequality for the most severe setback since the Great Depression. Almost all have offered prescriptions for restoring economic health; almost all presume as normal a growth rate that, but for a blip in the 1970s, has persisted since the end of World War II. Galbraith (Government/Business Relations/Univ. of Texas; Inequality and Instability: A Study of the World Economy Just Before the Great Crisis, 2012, etc.) dissents. Throughout his discussion, he slaps around economists from the left and right, chiding them for their insularity, their reluctance to widen their perspective and their unwillingness to concede that their theoretical models rest on radically transformed ground. We face a far different future, he insists, with the world economy no longer under the financial or military control of the United States and its allies, with energy markets costly and uncertain, new technologies destroying more jobs than they create and the private financial sector no longer supercharging growth. Under these new conditions, preserving post-WWII growth rates is impossible. Instead, the most we can hope for is an era of “slow growth,” engineering the economy “to grow at a low, stable, positive rate for a long time” and adjusting ourselves “materially and psychologically to that prospect.” Some of Galbraith’s remedies are likely to draw fire—increase social services, decrease the scale of the military, increase the minimum wage—but his forceful prose and admittedly provocative suggestions invite argument. General readers may find some of his discussion a bit too insider-y, but students of economics will enjoy the robust, fearless rebuke he delivers to some of the discipline’s giants.

A cleareyed, if dismaying analysis of the new normal, “a qualitatively different form of capitalism” for the 21st century.