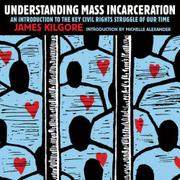 A handbook for making sense of America’s approach to crime and incarceration and its effect on communities across the country.

The discussion regarding prison sentencing and the prison industrial complex is not a new one. Social justice activist Kilgore (We Are All Zimbabweans Now, 2011, etc.), a former Symbionese Liberation Army member who spent time in prison for a 1975 bank robbery, refers to the late 1980s as “the most extensive campaign of prison building and incarceration in modern history." It was another decade before the term “prison industrial complex” gained wider currency, serving as a catchall solution not only for what was perceived as sharply rising crime statistics, but also as a panacea to deal with a wide range of other “social ills.” Many—though perhaps not enough—Americans are familiar with media-presented statistics that point toward an overwhelming tendency for our justice system to target and prosecute crimes committed by black people. The reality, Kilgore shows, is more nuanced. There is truth to that tendency, to be sure, but there has also been a cultural shift toward a bias against other minority groups, including transgendered and gender-nonconforming people. Where prisons used to at least put an effort toward rehabilitation through education, job training, and therapy, many prisons have moved toward simply warehousing prisoners. Kilgore digs into the reasons, which are more complex than any one cause (racism, greed, “tough on crime” politicians). The author also explores alternatives and their benefits, striking a careful balance among ideologies related to crime and punishment. In the introduction, the author states that it was his goal to explore the incarceration situation in a way that is both comprehensive and accessible. On both counts, he has succeeded.

Useful for anyone with a horse in the race regarding law enforcement—in other words, most American citizens.