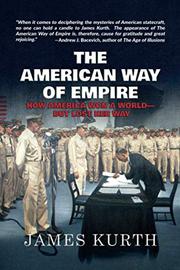 THE AMERICAN WAY OF EMPIRE

A remarkably comprehensive account of the history of American foreign policy coupled with unflinching predictions of its future.

Kurth (Political Science Emeritus/Swarthmore Coll.; Family and Civilization, 2008, etc.) notes that the general consensus in the international community is that “we are now nearing a major inflection point in world history”—one marked by the nearly certain end of the “American Empire” and the diminishment of its global influence. The height of the United States’ power, he says, will be from 1945 to 2020—the “American Century”—within which the nation managed to rebuild Europe after its victory in World War II and successfully defeat the Soviet Union in the Cold War. With dizzying scholarly breadth, the author traces the development of America’s foreign policy from its inception, marking the birth of its imperial stature in the late 19th century—specifically, the Spanish-American War and aggressive expansion into Latin America and the Caribbean. Kurth explores the nation’s cultural and ideological traditions in his search for the nation’s identity—one that abides despite oscillations in ideology among liberalism, conservatism, and socialism—and argues that Protestantism, as practiced by Americans, shows moral deterioration due to “successive departures” from its original version. One could reasonably criticize the book for attempting to traverse too broad an intellectual landscape. Still, this is a compellingly astute study and a brilliant indictment of the “extraordinary ambition, pride, greed, and fantasies” that left American influence “in ruins.” Over the course of this book, Kurth’s analysis is astonishingly exhaustive; he impressively covers the failings of the Iraq War, as well as the dangers of plutocracy, and he presents a conclusion that’s neither fatalistically grim nor cheerily hopeful: The United States will surely lose its worldwide dominance, he asserts, but not necessarily its prominence, and it will continue to persuasively offer the “most attractive…of the ways of life.” In order to do this, he says, it needs to maintain its technological superiority and recapture its economic strength.

A stunningly original work that provocatively explores the heights and depths of America’s global stature.