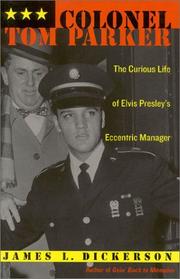 Dickerson (North To Canada, 1999, etc.) offers a low-rent biography of a sleazy character who deserves no better.

Colonel Tom Parker rose from being the pitchman for midway medicine shows to become the manager of Eddy Arnold and then the king himself, Elvis, leaving a trail of slime any slug would admire. The author gives him the full tabloid treatment: Parker goes from being plain “brash, boastful, and at time downright obnoxious” to downright venal in a few quick steps. Addicted to gambling, Parker mortgaged Elvis to Las Vegas to bankroll his vice (which amounted to more than $1,000,000 a year to one casino alone). He pushed Elvis to go on stage when a more appropriate venue for him would have been a hospital room; he never attempted to stop him from gorming barbiturates; he bullied Elvis’s friends and strong-armed publishers and songwriters into giving up their rights. Unfortunately, the value of Dickerson’s spadework in digging up so much damning material is compromised by his sensational approach. He gives us pop psychology (“By Christmas, Elvis desperately needed to trust someone, a person from whom he could receive unquestioning approval”), snobbery (“He should have been with a circus somewhere. That’s where he started, with dancing chickens and turkeys”), and dangling insinuations (“Exactly what Parker had in mind is uncertain and may never come to light, but. . .”). Too frequently, he also makes a hash out of facts: “During the first year more than a half million people visited Graceland” gives way to “more than 300,000 fans paid to tour the mansion in the first year.” Then there’s the sheer bombast and nonsense: “One cannot look at Colonel Parker without seeing the worst—and the best—of America as a nation.” Best? Please.

Curious? Eccentric? The only thing curious is the subtitle itself, for the portrait painted here is of a dirtbag, pure and simple. (Photos, not seen)