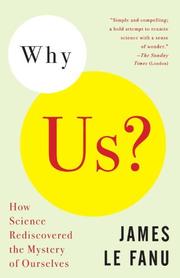 How Science Rediscovered the Mystery of Ourselves

British journalist Le Fanu (The Rise and Fall of Modern Medicine, 2000) investigates some thus-far-unanswered questions in genetics and brain research.

Scientists have made earth-shattering discoveries in recent years, writes the author, but still face many mysteries. Despite the fact that the human genome was mapped in its entirety in 2001, for example, they are still baffled as to how genes actually work—that is, how they generate the different species’ incredible diversity of forms, shapes and behaviors. Le Fanu also singles out brain research for scrutiny. Thanks to advances in scanning technology, researchers have identified the functions of many parts of the brain, but so far have been unable to answer the most basic question: how the firing of nerve impulses actually produce the phenomena of perception and thought. Apparently convinced that scientists have hit a sort of intellectual wall in these areas, the author devotes the bulk of the book to documenting their unexplained mysteries. For example, why does a defective gene in one person cause horrible disease, while the same defective gene in another person does not? How does the brain produce what we would call a sense of self? Le Fanu doesn’t seem to believe that these questions are completely unanswerable, but he does think that scientists will have to undergo a radical alteration in the way they look at the problems. What they lack, he argues, is a sense of wonder: “They have interpreted the world through the prism of supposing that there is nothing in principle that cannot be accounted for.” Le Fanu stops short of supporting intelligent design, but he appears to understand the impulse of those who think that mind-bogglingly complex problems might require resolution by a higher power than humankind.

An insightful look at the intellectual underpinnings of science.