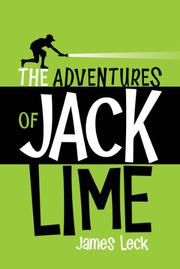 THE FURTHER ADVENTURES OF JACK LIME

More high school noir, centered on a humorless amateur gumshoe for whom a punch in the nose is all in a day’s work.

Jack’s face is still damaged after the capers in the previous casebook (The Adventures of Jack Lime, 2010). It takes further poundings as he tails the boyfriend of a slinky classmate to a forbidden dodgeball game run by local gangbangers and shortly afterward is pressed into service to recover a stolen comic by a punk collector with a violent temper. Being slower on the uptake than he should be, he is also repeatedly framed by a smooth operator—to the point that the school’s football team is treating him like a pinball in the halls and Principal Snit is on the verge of expelling him for good. Surrounded by a typical teen crowd of molls, geeks, plug uglies and people who are smarter than he is, Jack nonetheless manages to hold his own thanks to relentless focus, a sharp eye for clues and the occasional flash of insight. By the end, more than one murky scheme has been exposed, though a wild twist signals that Jack’s labors aren’t over yet. Jack’s advanced age notwithstanding, this is just the ticket for upper-elementary and middle school mystery lovers.