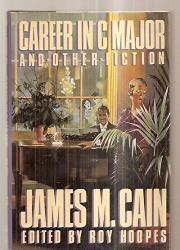 CAREER IN C MAJOR AND OTHER FICTION

Dedicated to revealing and preserving the human side of one of the preeminent tough guy writers of the 1930's, this volume brings together humorous short stories, satiric playlets, but only one work of distinctive (if very modest) quality: the comic novella Career in C Major, which originally appeared in hard-cover in 1943, then in a 1944 collection (Three of a Kind)—but was first sold to the movies. Made first as Wife, Husband and Friend (1939) and a decade later as Everybody Does It, the charming story involves a stage-struck wife who is content enough putting up with her husband's lack of success—but can't deal with his out-of-the-blue triumphs as a singer. Elsewhere, in labored sendups of politicians (The Governor, The Commissioners, etc.) and in Runyonesque tales of Hollywood comebacks and carnival hustlers, the comedy is dated, usually limp, only faintly amusing at best. In contrast to this work of the 1930's, however (much of it published in Redbook), The Visitor—written in 1961, published in Esquire—is briefer, crisper, less effortful: all about what happens when a man wakes one morning to find a tiger by his bed. Very minor work by a minor master, then, more for Cain scholars than general readers—with solid introductory materials by Cain biographer Roy Hoopes.