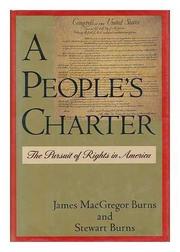 Few subjects deserve thoughtful or provocative treatment more than the Bill of Rights, enacted 200 years ago. What the Burns team (James MacGregor: The Crosswinds of Freedom, 1989, etc.; Stewart: associate ed. of the Martin Luther King, Jr., Papers/Stanford) offer instead is a well-organized but bland history. The authors are after bigger game than just the celebrated and hotly debated first ten amendments to the Constitution: They aim to show how rights have been extended from their original political realm by blacks, workers, and women, among others. The Burnses emphasize mass action, with only occasional explanations for the thinking behind the action; and though their material is organized in brisk, more or less chronological order and flares fitfully into life with the occasional gripping vignette (e.g., how abolitionist Angelina GrimkÇ nervously broke the taboo against public speaking by women), they frequently lapse into odd interpretations (more discussion of Abraham Lincoln as trampler on habeas corpus than as emancipator) and omissions (Thoreau's doctrine of civil disobedience, used in the civil-rights and antiwar movements of the Sixties). Moreover, by not adequately explaining the sources of clashing notions of rights (e.g., choice vs. right-to-life, freedom of the press vs. the right to fair trial), they fail to dramatize why the rights revolution of the past few decades has been so controversial. The Burnses conclude with enervated speculations on how to achieve such New Age-sounding goals as ``opportunity rights'' and ``nurturing rights.'' Stodgy and disappointing, especially given the authors' track record and the continuing urgency of rights at home and abroad. (Illustrations—not seen.)