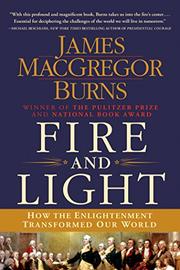 How the Enlightenment Transformed Our World

The great ideas and personalities of the Enlightenment condensed and compressed for accessible consumption.

The unleashing of the human mind from orthodoxy ushered in one of the most exciting periods in history, and consummate historian Burns (Emeritus, Government/Williams Coll.; Packing the Court: The Rise of Judicial Power and the Coming Crisis of the Supreme Court, 2009, etc.) proves a lively guide to the great currents of Enlightenment thought, from the justification of civil society by the gloomy theorist Thomas Hobbes to the clash over slavery and abolition in America’s Civil War. As announced by Martin Luther’s nailing of his Theses to the Wittenberg church door in 1517, the mind of man was the measure of all things, and only through rigorous empirical tests could ideas be tried and accepted. The received teachings of the medieval church were discarded in favor of “natural philosophy,” and men, although brutish, according to Hobbes, were governed by reason and “motivated to join together in a social compact by fear and the desire for self-preservation.” From Descartes, Spinoza and Locke, among numerous others, ideas of liberty, free thought and speech, religious toleration, and the ability of each individual to transform himself through environment, education and experience shook the “fixity and fatalism” of the Old World, unloosening the bedrock of absolutism and playing out successively in the English civil war, the American Revolution and the French Revolution. Burns maneuvers gracefully through these cataclysmic events, weaving in minibiographies of the notables and significant currents like the Scottish national school system, which gave rise to the stunning contributions of Scottish Enlightenment thinkers like Francis Hutcheson, David Hume and Adam Smith. Happiness, property, reform, universal suffrage: The author traces these key concepts to our own era, still worthy of fighting for, as evidenced by the recent events of the Arab Spring.