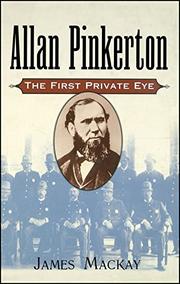 Mackay, a Scottish historian whose previous works include a biography of fellow Scot Robert Burns (1993), turns his attention to another Glaswegian, Allan Pinkerton. Pinkerton is best remembered as the founder of the private- detective agency that still bears his name. When he started the agency in Chicago in 1850, it had a staff of two; today it has a staff of thousands, with offices around the world. Pinkerton, who was born in 1819, was early left fatherless; as an adolescent he became a cooper's apprentice. His skill as a barrelmaker would be matched by his rapid rise in the ranks of radical politics, where he became prominent in the Scottish branch of the Chartist movement. Undoubtedly, his controversial past led in part to his decision to emigrate to America in 1842. Pinkerton and his wife, Joan, made their way to Illinois, settling near the budding city of Chicago. Scouting a seemingly deserted island for wood, Pinkerton came upon a mysterious campfire that led him to a counterfeiting ring. Soon after, he was appointed deputy sheriff of Cook County, and his career in law enforcement was underway. Eventually, he would become head of intelligence for General George McClellan and a key figure in Civil War history. It is in his treatment of the Civil War period, fully a third of the book, that Mackay falls down grievously. Too much of his time is spent in spirited special pleading for McClellan and a defense of Pinkerton's reputation. Mackay is, however, astute in his assessment of the relationship between the growth of Pinkerton's private agency and the railroad industry. After the war Pinkerton was involved in a number of notorious cases, including attempts to bring the James gang to trial and to suppress the Molly Maguires, a secret organization active in the Pennsylvania coalfields. More hagiography than biography, this rather lifeless narrative hardly represents a balanced portrayal of a controversial figure.