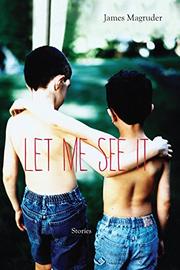 LET ME SEE IT

Ten linked stories about growing up gay, introduced by a prologue that elliptically takes us to the cores of the two major characters.

In the prologue, Tom Amelio—48 years old in 2008—is reminiscing about his first cousin Elliott Biddler, who died years earlier. The last (and title) story is set in 1992 and finds Elliott and Tom in Paris to witness the marriage of one of Elliott's former lovers and confirms our fears that Elliott has died of AIDS. In between, we get glimpses into the lives of the two cousins, who didn’t even meet until they were 19. Some of the stories focus on Tom, some on Elliott and some on both; Magruder shifts both chronology and point of view to allow his characters to be narrators in some stories and third-person participants in others. Tom and Elliott grow up, explore their sexuality, take on various boyfriends and lovers, and try to accommodate themselves to a culture that is less than understanding about a fundamental component of who they are. Elliott is the more outgoing of the two. A graduate of Cornell, he takes risks and likes to live on the edge. While in college, he participates in a program that lets him study in Paris, where he takes a lover and winds up getting la chtouille—which he announces is French for “the clap.” Tom is more subdued and less impulsive than his cousin, though he, too, takes numerous lovers as he feels his way through the sexual shoals of adolescence and early adulthood.

By turns comic and melancholy in tone but always razor-sharp in its insights.