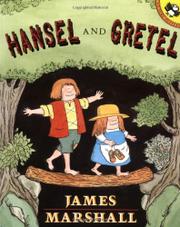 Once again Marshall works his magic on a popular tale, retelling without reshaping it and infusing both text and pictures with ingenuous simplicity lit by flashes of roguish humor. Gretel is the clearer-eyed here—the first to comprehend that the chubby, scowling woodcutter's wife (never specifically referred to as mother or stepmother) means no good, and that the gaudily dressed woman in the candy house is a witch. After the witch is "roasted to a regular crisp" in her own oven, Hansel and Gretel return home in triumph and are last seen decked with jewels, posing with their joyful father. Marshall's comic genius is less appropriate to this dark tale of betrayal than to "Red Riding Hood" and "The Three Little Pigs," which better lend themselves to farce; but his fans will probably be delighted with this anyway.