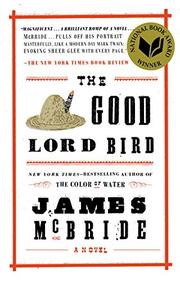 In McBride’s version of events, John Brown’s body doesn’t lie a-mouldering in the grave—he’s alive and vigorous and fanatical and doomed, so one could say his soul does indeed go marching on.

The unlikely narrator of the events leading up to Brown’s quixotic raid at Harpers Ferry is Henry Shackleford, aka Little Onion, whose father is killed when Brown comes in to liberate some slaves. Brown whisks the 12-year-old away thinking he’s a girl, and Onion keeps up the disguise for the next few years. This fluidity of gender identity allows Onion a certain leeway in his life, for example, he gets taken in by Pie, a beautiful prostitute, where he witnesses some activity almost more unseemly than a 12-year-old can stand. The interlude with Pie occurs during a two-year period where Brown disappears from Onion’s life, but they’re reunited a few months before the debacle at Harpers Ferry. In that time, Brown visits Frederick Douglass, and, in the most implausible scene in the novel, Douglass gets tight and chases after the nubile Onion. The stakes are raised as Brown approaches October 1859, for even Onion recognizes the futility of the raid, where Brown expects hundreds of slaves to rise in revolt and gets only a handful. Onion notes that Brown’s fanaticism increasingly approaches “lunacy” as the time for the raid gets closer, and Brown never loses that obsessive glint in his eye that tells him he’s doing the Lord’s work. At the end, Onion reasserts his identity as a male and escapes just before Brown’s execution.

McBride presents an interesting experiment in point of view here, as all of Brown’s activities are filtered through the eyes of a young adolescent who wavers between innocence and cynicism.