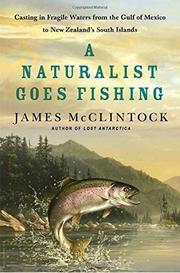 Personal and professional lives come together for McClintock (Lost Antarctica: Adventures in a Disappearing Land, 2012), an Antarctic marine biologist and passionate sport fisherman.

The author is especially worried about the growing threat to fish posed by the increased acidification of the world's oceans, caused by the absorption of carbon dioxide from the atmosphere. A fishing trip to the Chandeleur Islands off the coast of Louisiana evokes concern about the health of the habitat for the redfish and speckled sea trout that have drawn him and his fishing buddies to the area on yearly visits for more than a decade. This “portion of the Breton National Wildlife Refuge, the fifty-mile chain of uninhabited islands, is a naturalist’s dream,” writes the author. He has personally witnessed the effects of dredging, coupled with pollution and the impact of global warming, all of which are depleting the number of fish and reducing their size. Nonetheless, McClintock writes with relish about his adventures as a sport fisherman. He opens with a story of chasing redfish and speckled sea trout. After a 40-minute battle with a “big red” hooked on his tackle but putting up a strong fight, the fish got away. His brother was luckier in his battle with a trout, which was caught, held up proudly for a photograph, and then released back to the sea. The author also writes of a four-day stay in a fishing lodge north of Manitoba in Canada, where there is “some of the best lake trout and pike fishing in the world.” His accounts of these and other fishing adventures—in the Gulf of Mexico, the Bahamas, Costa Rica, and more—provide a lively backdrop for concerns about the effects of climate change

Enjoyable reading for sport fishermen and other outdoor enthusiasts who can look past any issues regarding cruelty to animals.