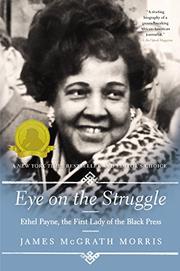 EYE ON THE STRUGGLE

Ethel Payne, the First Lady of the Black Press

Struggling to obtain a formal education during an era when women, especially African-American women, found most schooling off-limits, Payne did not find her calling as a journalist until she was nearly 40. Before that, she labored in a Chicago library and found employment in Japan helping African-American military personnel stationed by the Pentagon adjust to life abroad. All along, she wanted to become a writer. Growing up in Chicago, Payne was aware of the Chicago Defender, the most prominent newspaper in the country owned by an African-American and devoted to writing about them from a perspective radically different from that of the Caucasian-owned media. While working in Japan in 1950, Payne met a Defender reporter who had served the United States during World War II and at the time was writing about the role of African-American soldiers in the Korean War. Payne, an impressive individual by any standard, parlayed the acquaintanceship into a salaried job. During a journalism career that began at the Defender and resumed there after a hiatus caused by the newspaper’s sometimes-mercurial publisher, Payne wrote about U.S. presidents, African nations, the Vietnam War and her hometown of Chicago. Due to her gender and race, Payne always stood out at presidential press conferences and just about everywhere else, but she rarely flinched from any obstacles that stood in the way of the story. Morris does not flinch from his status as a white male chronicling the life of an African-American female, and he discloses that he received unstinting support from Payne’s family members and acquaintances. His access allows him to reveal intriguing subtleties about her work and her personal life.