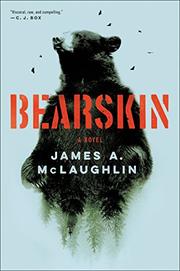 by James A. McLaughlin

A fugitive from a Mexican cartel takes refuge in a forest preserve in the wilds of Virginia.

Rice Moore, the troubled protagonist of this hard-edged thriller, can best be described as remote, a characteristic he shares with his hazardous surroundings. He’s taken a job, under a false name, as the caretaker for a family-owned nature preserve in the Appalachian Mountains. It’s a slim chance for him to escape his past, one that includes a gig as a drug mule for the Sinoloa cartel, the torture, rape, and murder of his girlfriend, and a long stint in a prison in Nogales, where he trained as a sicario—a most hostile killer of men. Rice is a dangerous man, one bound to surprise the bullies, hunters, and motorcycle gangs that roam these mountains. In a very Billy Jack way, he soon runs afoul of all manner of local threats, among them the police, a suspicious neighbor, and a band of predators who have been killing the mountain’s bears, removing paws and gallbladders for black-market sale in Asia. Rice also takes offense when he learns that his predecessor, a biologist named Sara Birkeland, was viciously assaulted and raped during her tenure as caretaker. It’s a violent, compelling story that uses its milieu to incredible effect. Eventually we find Rice stalking the land in a ghillie suit, blinded by visions, waiting for the kill—a patience that comes in handy when he later finds himself in a desperate showdown, fighting for his life against the past that has come baying for his blood. Told in spare prose and portraying the authentic mechanics of hunting, combat, and psychological defense, the novel dares the reader to root for this damaged antihero but convinces us that he’s worth it.

An intense, visceral debut equal to the best that country noir has to offer.