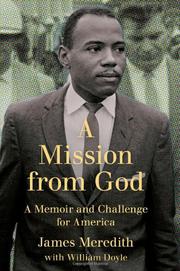 A MISSION FROM GOD

A Memoir and Challenge for America

by James Meredith with William Doyle

The first black graduate of the University of Mississippi pontificates on his place in civil rights history.

In this somewhat hyperbolic memoir of his challenges to white supremacy in Mississippi in the 1960s, Meredith displays little doubt of his importance to the movement. Born in Kosciusko, Miss., in 1933, Meredith was the great-grandson of the Confederate legal officer J.A.P. Campbell, who later fashioned Mississippi’s code of white supremacy, and the son of a hardworking farmer with the “wisdom of a prophet” who inspired Meredith with a “divine responsibility to save the black race.” Inferiority to whites was not acceptable to Meredith, and nearly a decade in the Air Force proved a severe trial, especially when the only time he experienced fairness and respect was while stationed in Japan in the late ’50s. He vowed that to be a man, he had to force change back home. Completing a degree in political science at Ole Miss, the “holiest temple of white supremacy in America,” had been an early dream, and his case was taken up by Medgar Evers, Thurgood Marshall and the NAACP, and eventually settled by the Supreme Court. The Little Rock Nine had cracked open Arkansas’s Central High School in 1957 with the help of U.S. combat troops, and Meredith, disdaining King’s efforts at nonviolent civil disobedience, hoped for the same powerful display of federal force. He got it. Surrounded by troops, he stood up to Gov. Ross Robert Barnett Jr. over two fraught weeks in September 1962 as the state and its defiant white citizens staged an insurrection against the Kennedy brothers. Meredith elaborates on his becoming irresistible to women, black and white, his shooting in 1966 and his uneasy relationship with civil rights leaders and politicians, and he ends with an urgent plea for hands-on improvement to public school education.

Revealing details of this fraught era couched in an overly self-aggrandizing tone.