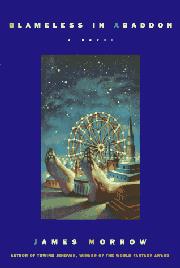 Sequel to Towing Jehovah (1994), Morrow's satirical fantasy recounting the towing of God's two-mile-long body to its last resting place in the Arctic ice. Debate as to the body's true nature continues—is it just a cast-off shell? is He merely comatose?—even after an earthquake frees the body and it winds up in Florida as the centerpiece of a theme park. Meanwhile, honest Judge Martin Candle of Abaddon Township, Pennsylvania, develops prostate cancer. His prognosis is poor. Not only that, but just after returning from a trip to God's theme park—during which Martin was vouchsafed no miraculous cure—his beloved wife, Corinne, dies in a grotesque accident. Enraged and full of grief, Martin announces the formation of the Job Society, dedicated to prosecuting God before the International Court of Justice at the Hague for His crimes against humanity. Poor Martin, constantly popping painkillers, his prostate full of radioactive particles, his breasts swelling from hormone therapy, learns that the defense counsel will be the formidable G.F. Lovett, theologian and wealthy bestselling children's author. After a wild safari through God's brain in a desperate search for evidence and witnesses, Martin learns that his cancer is winning. A powerful new experimental drug might keep him alive through the trial. Unfortunately, the drug turns his brain to mush, rendering him incapable of refuting the religious opinions arrayed against him. A clever, thought-provoking, and well-informed yarn that boldly and wittily tackles the imposing issues raised in Towing Jehovah; still, it's hard to absorb, and—well, heavy.